The Expressive Richness of Indian tunings

The major third is the invisible elephant in our musical system. Nobody notices how awful the major thirds are. Nobody comments. Nobody even recognizes that the elephant exists. Living with this elephant is assumed to be so much better than the unknown alternatives that it’s a nonissue. Asked about it, some people even claim to prefer the elephant; they have grown to like the elephantine thirds.  –Duffin, 2007

The syllable OM, which is the imperishable Brahman, is the universe. Whatsoever has existed, whatsoever exists, whatsoever shall exist hereafter, is OM. And whatsoever transcends past, present and future, that also is OM.  –Mandukya Upanishad from the Vedas

Cosmic sound, infused with the essence of Consciousness, has been known variously as AUM, AHM, AMEN, AMEEN, OMEN, OMON, I AM, HU, YAHUVAH…”  –David Tame

For the ancient Indian philosophers, “Om” is more than a symbol of the imperishable Brahman; it is the very vibration of Brahman itself. Have you ever seen a tonoscope? Hans Jenny invented it; it’s basically fine sand poured on a tight membrane like a drum head. As sounds pass through it, the random grains of sand organize into patterns, like this: https://www.youtube.com/watch?v=W6PSA5bYTxs. Amazingly enough, when an Indian Yogi chants the ancient Om, the equally ancient visual symbol of the “Om” appears. 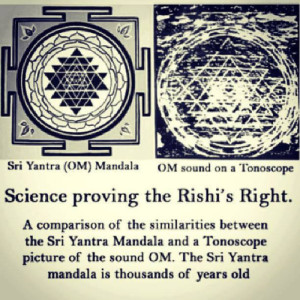 As I said in Chapter Two, Ahata is the term used for audible sound; anahata describes the Primordial Sound emanating through the Heart which only yogis in deep meditation can hear. The dronal sound of the tamboura is ahata, but it evokes anahata. This is why, unlike in Arabic or European music, there is never modulation in Indian classical music. For ancient just-intonation systems worldwide, it is technically very difficult to change the root note in the absence of some kind of temperament. But in India, it goes further than that. I showed a learned theorist of ancient Indian music my 53-equal tuning system, and he was impressed that he could easily pick out all of the notes of the many scales he knew, and that they were all very much in tune. But then I showed him how he could use the 53-eq system to bring modulation into the Indian musical fabric. “In Indian tradition, changing the key signature would symbolize the utter destruction of the universe and its complete recreation. Just saying.”

Like the Chinese, the ancient Indians tried to tie their musical and astrological systems together. Some people have claimed that the original pitch of the chanted Om was near a low C2#  at 136 Hz. From that Om pitch, which is too low for all but a basso profundo to sing, one need only drop down another 32 octaves and you will get a wave that takes a year for a single vibration—pretty much exactly the time it takes for the Earth to travel one full time around the sun.

The ancient Indian understanding of the overtone series created some of the most complex harmonic relationships ever explored.  Some of the Indian scales or ragas climb up two major thirds above the root – and up to three perfect fifths away from that. The tablas are often tuned to the seventh harmonic of the Root. The complex but singable ratios of 25:24, 25:18 and 75:64 are common in Indian classical music. The ancients created 22 sruti, or 22 harmonically connected notes, from which they would choose from five to nine notes (seven notes plus two more for major/minor switches) to create their many scales, or ragas. These different scales employ perfect fifths and fourths, major and minor thirds and sixths, and even thirds of thirds, creating very emotionally charged harmonic relationships.

The term raga means “passion,” and implies more than a mere scale or mode. Each raga is a grouping of pitches that represents a definite emotional state.  With only one emotion often expressed, Indian music takes you deep into that emotion, rather than changing moods as the music progresses. Every raga has four elements: a tonic, constantly played; a scale of between five and nine notes (which may be major vs minor for ascending and descending passages); melodic figures which constitute the theme; and a Vadi (dominant), which is any note which is played much more often than others. Here is the diagrammatic example of the Bhairav raga:

Let’s look carefully at this scale. First of all, you can hear that different notes are commonly sounded on the scale’s ascent and descent. In the diagram above, you can see that the C – G drone rests mostly underneath and separate from a pentatonic scale (the other five notes besides C – G). The F is also in the Pythagorean spine, grounding the drone note C with fifths both overtonal and undertonal. The B1 and the C2# (D1b) come very close to the pitch of the root, and the G2# (A1b) floats just 2/3 of a half step above the fifth.  But the fact that these two notes are closer together does not make them “dissonant.” It’s more like two people who are attracted to each other who climb into bed together without actually touching. They would certainly feel a yearning for union! The 25/24 harmonic relationship actually creates a beautiful soundscape of closeness, whereas two notes a twelfth of an octave apart (a 12-eq half step such as C-C#) create jarring acoustical dissonance which cries out for resolution (escape?).  In this Indian raga, however, the voice hovers as if in space just above and below the dronal notes, getting very near in frequency to create a sense of deep desire to return to the spiritual center. And while these harmonic relationships stretch our ears, there is also an exquisite beauty and logic, Cosmic Sound, and yes, truth, here…

If you would like to learn more about this chapter, “The Expressive Richness of Indian tunings,” with many more Indian ragas or modes, you can buy the entire book, The Grand Unified Theory of Music, in pdf form for $25 with hundreds of embedded musical examples of scales and chords from all over the world.