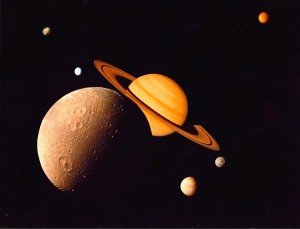 Pythagoras taught that the orbit of each of the seven planets produced a note based on its distance from the still center of Earth. The distances were compared to the subdivisions of the string. This is the Music of the Spheres. Pythagoras said, “There is geometry in the humming of the strings … there is music in the spacing of the spheres.” The sound produced is so exquisitely rarified that our ears can’t hear it. It is the Cosmic Music which Philo of Alexandria claims Moses heard on Mount Sinai, and which St. Augustine believed we hear as we die, revealing the highest reality of the Universe. Pythagorean proportions were used in architecture for thousands of years, in everything from the Parthenon to the Villa Capra Rotunda (Figure 7-3 see photo). The 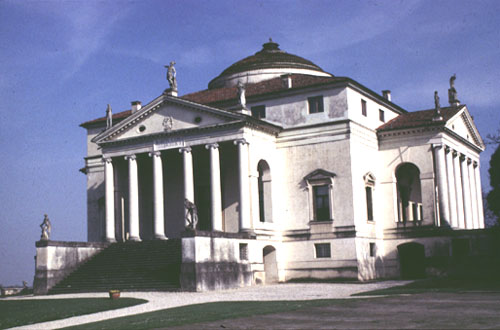 idealized Pythagorean proportions of planets in orbit around the earth are not accurate representations of the actual elliptical orbits of planets around our sun. In fact, if you take the distance of Pluto from the Sun and call it C, then octave-reduce the distances of all the other planets from the Sun relative to Pluto’s distance using ratios, then average out the elliptical qualities of the orbits, it looks and sounds something like this:

However, applying Bode’s Law, if you use Mercury as your starting point, you see “octave relationships” in the planets, like this:

If you would like to learn more about the sounds and pitches you can generate with 53-equal tunings, you can buy the entire book, The Grand Unified Theory of Music, in pdf form for $25 with hundreds of embedded musical examples of scales and chords from all over the world.