“Music is a moral law. It gives soul to the universe, wings to the mind, flight to the imagination, and charm and gaiety to life and to everything.”  — Plato

In every culture, whether tribal or hierarchical, singers naturally found the “sweet” spots of tuning we now know are the natural harmonics. They developed countless thousands of scales, which they used to create billions of melodies. Let’s look at another “advanced” culture and see how they organized their music into a consciously developed system of music theory.

From ancient China, fast forward 2300 years to ancient Greece, where Pythagoras decided to standardize the music of his compatriots. The Greeks had already created a number of modes based on the simple harmonics. The problem for Pythagoras was that the pre-Pythagorean Greek modes were non-standardized and often five-limit. That yielded the simplest harmonics for singers, but it was not mathematically elegant enough for Pythagoras. In Figure 2-7 you can see and hear a direct comparison between the 5-limit pre-Pythagorean modes and the 3-limit versions of the same modes as Pythagoras envisioned them.  In our major scale (ancient Ionian mode), the third, sixth and seventh scale steps are higher in their “Pythagorean” or 3-limit versions. You can also see that Pythagoras’s tuning all fits on a single straight line. Very pretty, but that long string of perfect fifths creates unsingable intervals! In the first line, the Pythagorean B which appears at the right end of the chain has a ratio of 243/128 against the C. The B1 of the old five-limit scale sports a ratio of 15/8. Which do you suppose the human voice would gravitate towards? 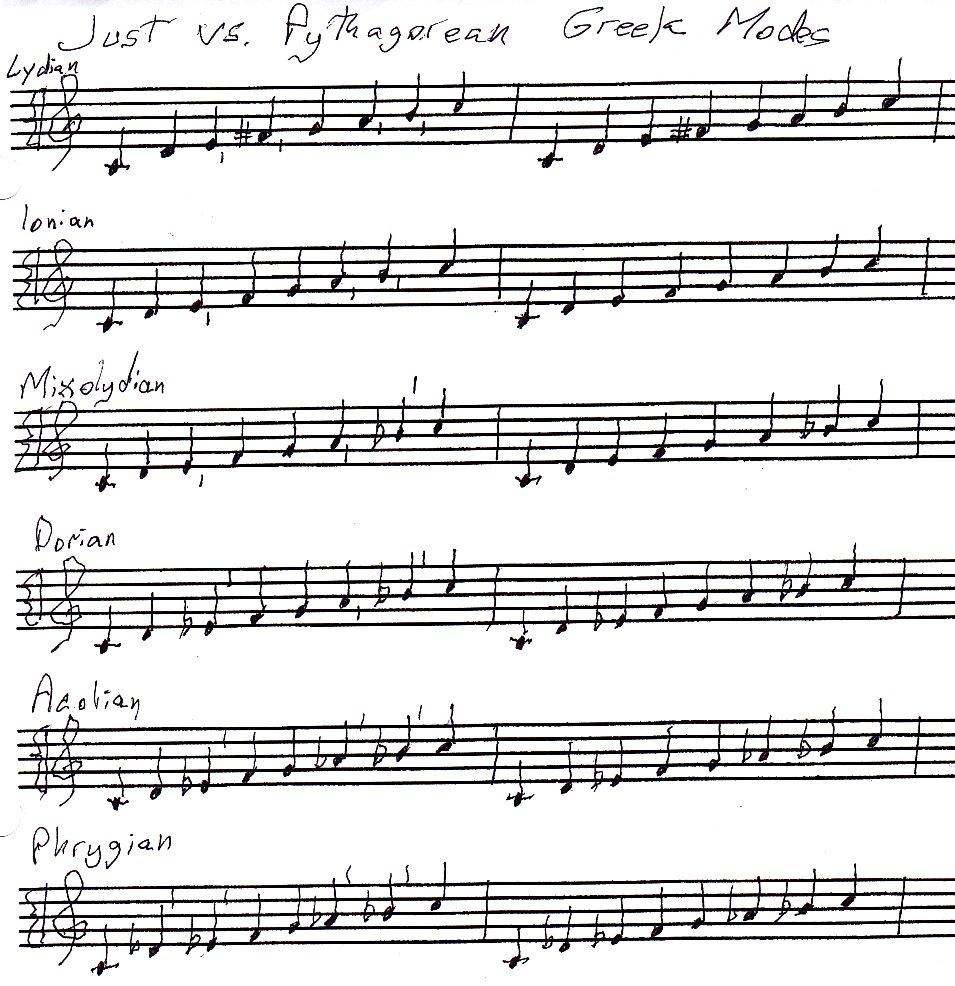 Notice that the “Pythagorean” version of these ancient modes sounds more familiar to our ears, and when placing the Just 5-limit versions of these modes side-by-side with the Pythagorean versions, the Just versions actually sound slightly out of tune. That is because our modern piano is tuned to an almost-Pythagorean system of perfect fifths. It’s what our ears are used to. In time, however, the Just version is discovered to be much easier to sing and play, because it brings out the simpler ratios….

If you would like to learn more about this chapter, “Ancient Greece,” you can buy the entire book, The Grand Unified Theory of Music, in pdf form and on a complete website for $25 with hundreds of embedded musical examples of scales and chords from all over the world.