The division of the octave into 53 intervals is in conformity with the nature of sounds… Any other intervals would not bring out a distinct expressive quality, and would in any case be less consonant. Their use is therefore without interest.  – Alain Danielou, Music and the Power of Sound, 1943

In the mid-20th century, Alain Danielou advocated for 53-equal tuning in his book  Music and the Power of Sound. His book appears to me to be riddled with poor explanations and even mathematical mistakes, which made the exploration of his musical system almost impossible.  Still, there was much interesting information, including a system of describing a harmonic relationship for all 53 notes. These are the 53 ratios Danielou chose to have represented in 53-equal temperament. None of these harmonic relationships go past the fifth harmonic, which is consistent with the fact that the ancients only very rarely explored seventh-harmonic relationships. I would suggest that two enharmonic (skhismic comma) notes be added to this because they are of real practical value for composers. The Db and Ab on this lattice are useful for Pythagorean scales, but those notes can also be useful when expressed as C1# (the leading tone of D, ratio 135/128) and G1# (the leading tone of A, ratio 405/256), Both of these would appear to the right of the F1# one row above the Middle C line. The rest of this chapter “translates” the Just Intonation/53 system of Danielou into my system of notation and explanations. 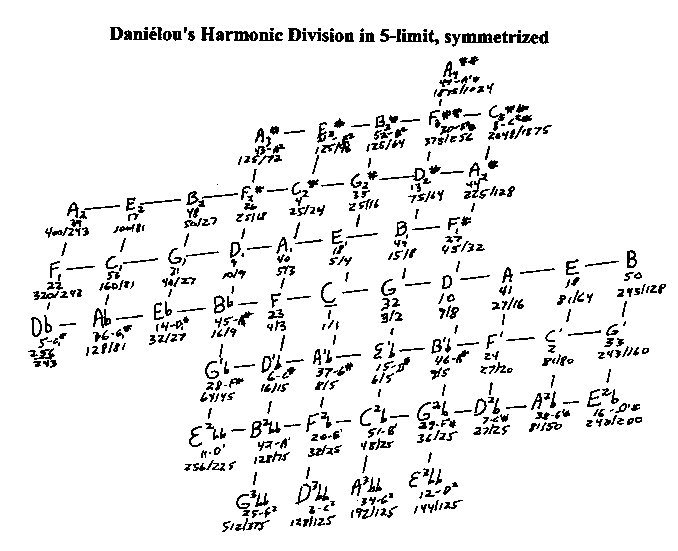 If you would like to learn more about this chapter, “Daniélou’s Harmonic Division in 5-limit,” you can buy the entire book, The Grand Unified Theory of Music, in pdf form for $25 with hundreds of embedded musical examples of scales and chords from all over the world.