My music is not lovely. –Arnold Schönberg

The 53-eq sound palette is extremely friendly to tonal and modal systems from all over the world, because all the natural harmonies in common usage are there. Evoking tonality in 12-eq is actually rather difficult. The 12-eq perfect fifth is a reasonable approximation of the real thing, but the thirds and sixths are pretty far off, and composer and listener alike have to work hard to create the musical context necessary for the ear to accept the faux-thirds of 12-eq as tolerable substitutes for the real thing. Allaudin Mathieu once said that even Mozart on a good day gets exhausting to the ear as a result! As harmonic language becomes more complex, the inherent symmetry of 12 equal notes in an octave becomes more obvious. Liszt, Wagner and Strauss exploited this to great effect, and moved towards the dissolution of tonality altogether.

Tonality itself is one of many systems of rules designed to maintain the sense of a musical center. The rules are derived from the nature of acoustics and our ears’ desire to have resting places in our musical journey. I have heard atonalists assert that tonality is artificial, and that even Bach wrote music that tends to dissolve the feeling of a musical center. I simply do not believe this is the case. The “artifice” of tonality can correctly refer to the rules of Western harmony, but those rules are firmly grounded in psychoacoustics. And however complex Bach’s music may be, his harmonic journeys always take you back to the home key, and you know when you are floating around in tonal uncertainty and when you have returned to where you started. There are plenty of rules in traditional Western harmony that are designed to create the feeling of a tonal center, and yes, without any organizing principles or traditions, you get random atonality and noise. But tonal music traditions answer a natural craving for sound that organizes itself harmoniously and beautifully around a center.

Arnold Schönberg had a more valid complaint about where tonality was going, however. In the early 20th century, composers modulated around very quickly, employing diminished seventh chords and weird suspensions to leap into obscure harmonic territory almost every measure. Then they would simply tack the tonic chord from the home key onto the end of the piece. The journey was so convoluted and the resolution so arbitrary, the ear had no idea when the journey was finished! With music like this, audiences often don’t know when to applaud, so they wait for a cue from the conductor.

Schönberg eventually abandoned the idea of a tonal center altogether. The creation of the twelve-tone row, where all 12 notes are treated equally and none of them represents anything like a “tonic,” became hugely important, and almost completely dominated academia in the post-World War II era. Of course, creating dodecaphonic music requires the artifice of rules even more than tonality does. And interestingly, it is rules of avoidance: no octaves, no perfect fifths or fourths, few or no major or minor thirds. Anything that could create a sense that one of the twelve notes is somehow at the center of the other notes is forbidden. It’s like a musical version of the game of Taboo. In 12-eq dodecaphonic music, then, the 12-tone rows (they are not melodies, they are tone rows, remember!) sound obscure and dissonant—with no rest for the weary ear.

Schönberg ‘s “emancipation of the dissonance” means no chords as well as no melodies. Now they are called “tone clusters,” and again, they must be carefully crafted to avoid those pesky harmonious intervals.

In 2014, I had an interesting conversation with Johnny Reinhard, director of the American Festival of Microtonal Music in New York.  At that time, his works used pure just intonation up to the 128th harmonic, and most of the musical relationships he dealt with were from the 13th harmonic on up. His music can sound very complex and even obscure as a result, but to me it never sounds dissonant. To his ears and mine, dissonance is what we hear in the inherent inharmonicites of a 12-eq chord. It’s the “beats” I hear when a piano plays two notes a major third apart. When you can see notes that sound together which are canceling each other out on the oscilloscope, that’s dissonance.  In that sense, there is almost no dissonance between any two notes in in 53-eq music. Every note has a harmonic connection to every other note, and they are almost perfectly in tune. In Johnny Reinhard’s 128-overtones just system, theoretically there is no dissonance at all. Complex consonance in either of our systems is not really the same “dissonance” as Schönberg  describes it . However, when you start piling pitches together in dense tone clusters, that changes again. Tone clusters create profoundly clashing overtones among the notes that cancel each other out. Even individual pairs of pitches are not exempt from the experience of dissonance. C to C1 creates a 160/81 ratio, but the affect for the listener is that of two piano strings painfully out of tune with each other. It happens to be the “wolf” interval which 12-eq successfully eliminated from music, and few people enjoy hearing it!

Here again is an example of part of the harmonic lattice in 53-eq, centered around the note G1b. I created this for my quasi-atonal piece “From This Kind of Longing.” There are clear harmonic relationships of the “center” with the other 52 notes in the octave. The boot-shaped line encircles the seven notes played by an ancient 7-note harp, from which intensely ga-ga-oriented modes can be created. Near the bottom left are the two modes played on the harp as this piece progresses. Because of all the notes “outside the boot” are also being played, this does not sound at all modal. But all those “outlying” notes are reasonably closely related to the modal notes “in the boot.” The piece sounds random and atonal at first, but there is a logic to the harmonic structure which hopefully gives the ear something to grasp on to, even if subconsciously. The closer harmonic relationships are also labeled with the ratios of each note relative to G1b:

From This Kind of Longing lattice only Figure 15-1 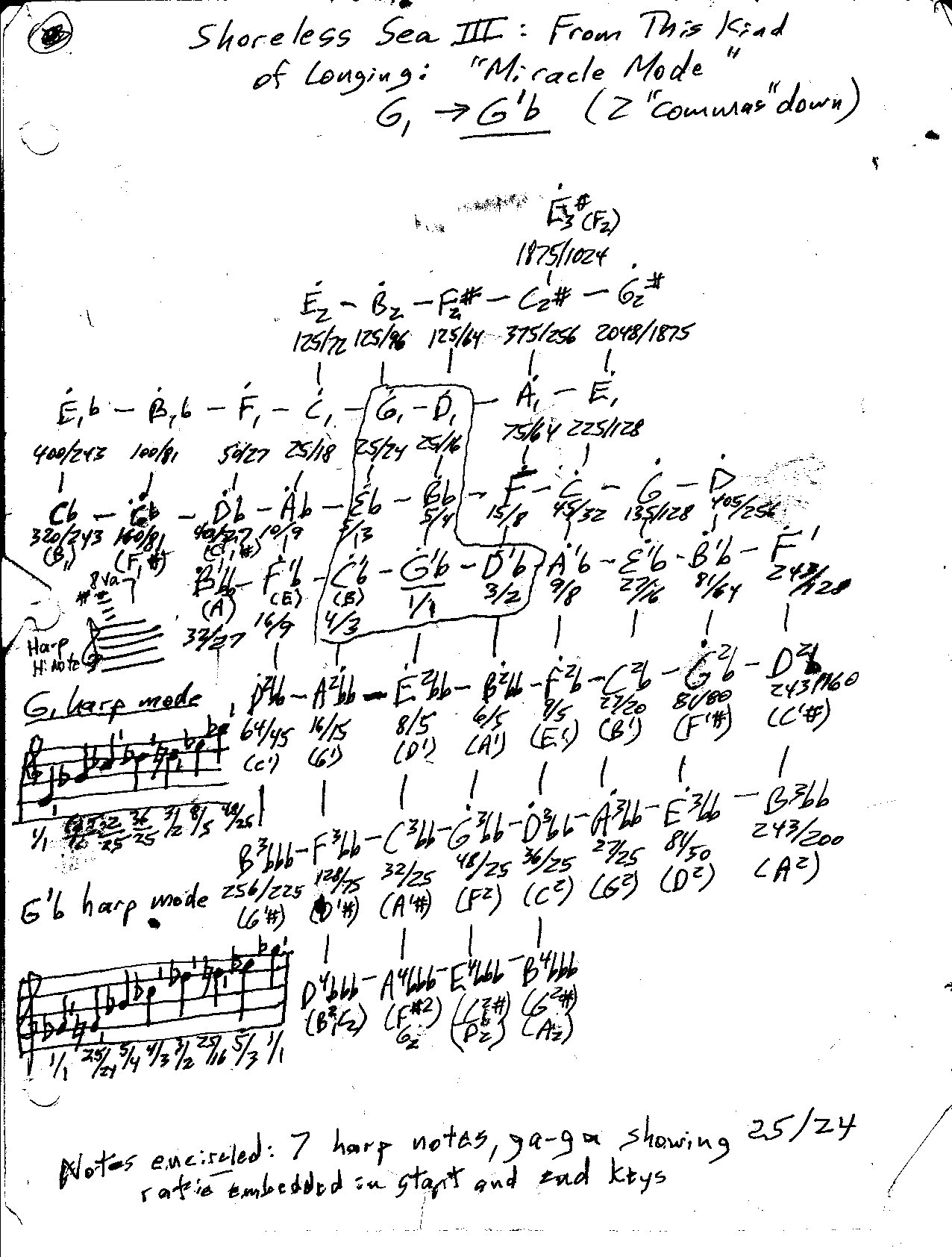 So does the Schönberg esthetic have any place in 53-eq? To the human ear, yes it does. That’s because there is still a threshold of complexity beyond which the ear experiences dissonance (or noise, or cacophony). And I already know of at least one way-cool example of a 19-tone row in a 19-eq system, played by microtonal guitarist Neil Haverstick (“Spider Chimes” on his CD The Gate). I tried to create a 53-tone row, following as many of the dodecaphonic “rules of avoidance” of natural harmonics as possible, but my quinquagintitriphonic row sounded pretty terrible.

I’ve had much more success, however, with creating tone clusters. I love the sound of them. The ear can’t easily hear the harmonic relationships in these clusters, so they tend to sound somewhere between densely obscure and dissonant to the ear.  But hidden in every 53-eq tone cluster is a complex maze of harmonic relationships, so the sound is clearly different. At the end of my 20th century-style piece “From This Kind of Longing,” I actually play all 53 notes at once in a truly monstrous tone cluster.  The first twelve-note tone cluster I know of (in traditional tuning) was created in 1910 in the Adagio of Mahler’s Tenth Symphony. It took another 114 years for the world to get to a 53-tone cluster. While I may not be able to create Schönberg –style acoustic dissonance, I can surely create a tangled web of density no 12-eq composer can hope to match!

The tonal relationships that are easiest for the ear to hear are those that are next to each other on the lattice. My teacher Allaudin Mathieu calls this “matchstick harmony” (Harmonic Experience, pp 158-159). The rules are simple: to make it easy for the ear to hear a chord change, move only one line at a time on the lattice from chord to chord. The one exception is that you may move up or down two perfect fifths as long as you go right back and fill in the chord you leaped over.  Looking at the 53-note lattice above, this means you can move from a C Major chord to F, C, Ab or E. You may also jump from C to Bb to F, or C to D to G.

The rules of harmonic movement also apply to the creation of chords. There’s a “matchstick” quality to every single chord in the tonal universe. Even the dominant seventh chord, with its gap of two fifths in it, collapses into the skipped-over note (G7 = G-B-D-F; the G and the F are two fifths apart and the chord resolves to the C chord to fill the gap). Triads are always triangular in shape: check out the C Major and Minor chords as simple examples (C-E1-G and C-E1b-G). Seventh chords generally are limited to two spines (such as the C Maj7, which is C-E1-G-B1).

If you would like to learn more about the ancient tunings worldwide and contemporary musical ideas for 53-equal tuning, you can buy the entire book, The Grand Unified Theory of Music, in pdf form for $25 with hundreds of embedded musical examples of scales and chords from all over the world.